Escape from Tarkov Woods map is where you will be directed in the early phase of your game journey. If you enjoy taking down your targets from a distance using a sniper rifle, this map is specially designed for you. There’s a lot of room to shoot around and try out your scopes, as it’s one of the larger game areas. In this guide, we will explain all the exits or extraction points on the Woods map Tarkov to help you get out of different areas easily. Below, you will learn about the map’s best places to spawn, where to leave, where to find the weapons and loot, and all the Scav locations.

As the name indicates, the Woods Tarkov map is a massive wooded region packed with mountains and rocky cliffs. In addition, there are large stretches of open land making it excellent for battles that occur at long distances perfect for snipers and you will find many of them throughout this terrain. There are 6–12 players in every 45–minute Raid on the map, with a significant amount of NPC Scavs all over there. Learning your way around the areas can be challenging because the landscape mostly consists of nothing but trees with no clear landmarks.

We have provided several guidelines below to avoid unintentionally walking into a dangerous situation. This Woods map Tarkov tutorial aims to help you find everything you need, including exits/extractions, loot & Scavs locations, and dangerous boss areas. Moreover, we do our best to provide helpful advice to ensure you can have a pleasant and productive trip in these complex surroundings.

First of all, it’s recommended to carry 5,000 rubles with you for your initial raid on the Woods Tarkov map. You will require these when the time comes to leave. Out of all 28 spawning locations, there are only five which you can find in the map’s center, while the rest line on its edges. There’s no way to avoid having to go through the boss first, who can be found at the Sawmill. 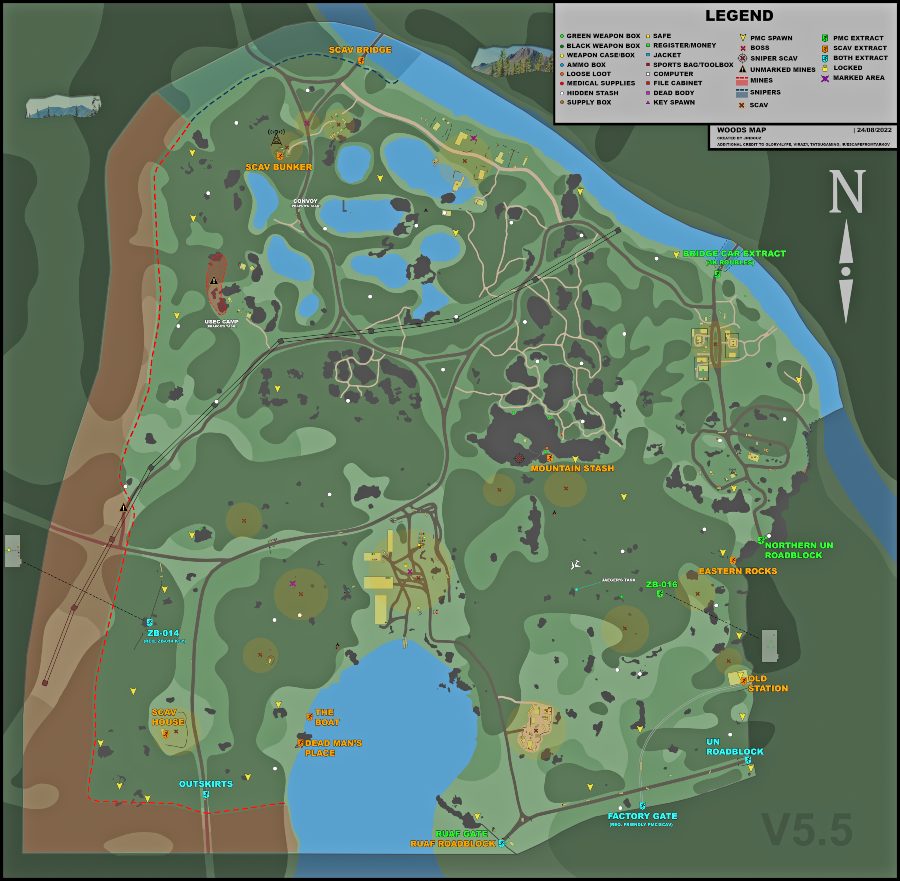 The best way to understand the Tarkov Woods map is by considering the massive pond which you can see as a large blue area in the image. Because it is both a key location and geographically close to multiple exits/extractions.

While considering the extraction areas on the map, there are a lot all across the region. But, there are only a few that everyone can use while some are for only Scavs and a few other can only be accessible by PMC players. Below, we have separately listed all of them so it becomes easy for you to identify each.

Having a backup plan is essential for the Woods map in EFT if you ever get lost while trying to get around from your spawn because of the forestry area. The map features five useful landmarks: a vast water area in the north and east, northern Tarkov city, a nuclear power plant in the east, a massive south lake, and large hills in the center.

The large mountain and the nuclear power plant are excellent landmarks for locating yourself. If you want to find Tarkov city, you can only do that from the top of the hill or the northern side. Alternatively, the plant is more frequently visible through the trees. Using the cooling towers, you may quickly and easily find your way across the whole Tarkov Woods map. It’s safe to assume that you are located on the western coast of the map if a blue haze obscures the towers. Seeing them would indicate that you are heading to the east.

As you explore the Woods Tarkov map, you will run upon enemies eager to fire their weapons. But Scavs rarely venture far from their surveillance zones, centered along the river’s northern and eastern banks. However, most scavenging action occurs near the enormous lake and sawmill in the south. If you decide to relocate that spot, be on your guard. Remember, a sniper observes the terrain from the sawmill’s northeastern hill area.

Starting out, it’s better to focus on the north and east regions of the Woods. This area is relatively free of Scavs, and it’s easier to make out the landscape. Some boxes in this place include weapons, while others have military supplies. But watch out for the Scav with a sniper in his hands who’s lurking atop the massive rock in the map’s center.

Well, there is a wide range of weapons to use throughout the journey in Escape from Tarkov, but using them effectively depends on your skills and the right shots. As we are talking about the EFT Woods map in this guide, so it is recommended to have a professional sharpshooter or sniper rifle with you in this area.

Many firearms fall into these two categories but to make it easy for you, we suggest Remington Model 700 (M700). It’s the best sniper rifle available due to its affordable pricing, rapid rate of fire, and precision. On the other hand, the SVDS’s reduced recoil and enhanced accuracy make it an excellent choice for a dedicated marksman rifle. Additionally, equip the scope you prefer and other suitable attachments and you are ready to have some real action.

If you are in the sawmill or its surroundings, you should use caution as this area is filled with many Scavs, and the Shturman boss is also available in the sawmill. On the other side, the massive lake on the southern end is another dangerous place where you should be very careful as you can usually find yourself in front of many opponent players near the edge.

Aside from spawning on the hill, the Shturman boss can also wander the area near the sawmill. While he may be in other locations occasionally, he spends most of the time at the red building. Your focus must be on the three Rogue bosses guarding the SCAV Bunker’s extraction. Looking at the top of the Woods map Tarkov, you can see an antenna symbol showing the Bunker exit.

The Cultist Priest is another enemy of Woods, along with Shturman and the Rogue dangers. You can find them at the settlement to the SCAV Bridge’s east village, which is located towards the north. The west of the sawmill is another possible area to face them.

The Shturman boss is accompanied by two of his group members who fight for them. This trio is cautious of getting too close to the player because each has long-range firearms. Before attacking you, the boss first shoots at you 3 to 5 times as an alert. But if you shoot back, all three will duck for cover and continue attacking you.

It would be best if you undertook some thorough recon about the sawmill before attempting to defeat Shturman and his soldiers there. It’s best to stay away from long-range fights. Your attempt should be to get closer to them and immediately eliminate them, as facing these enemies from a distance is not a wise option. They are vital in long-distance conflicts and always try to avoid the players.

It takes a lot of time and effort to master Escape of Tarkov. Given that many newbies have trouble navigating their first several Raids, we decided to put on this detailed guide so the players can quickly learn and become experts on the Escape from Tarkov Woods map. To that end, we offer our sincere appreciation for your time spent reading this walkthrough. Furthermore, you can also check our Escape from Tarkov Lighthouse map guide.